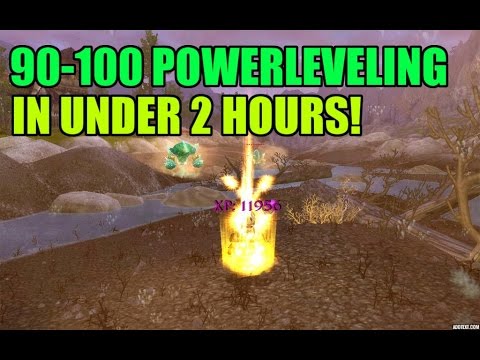 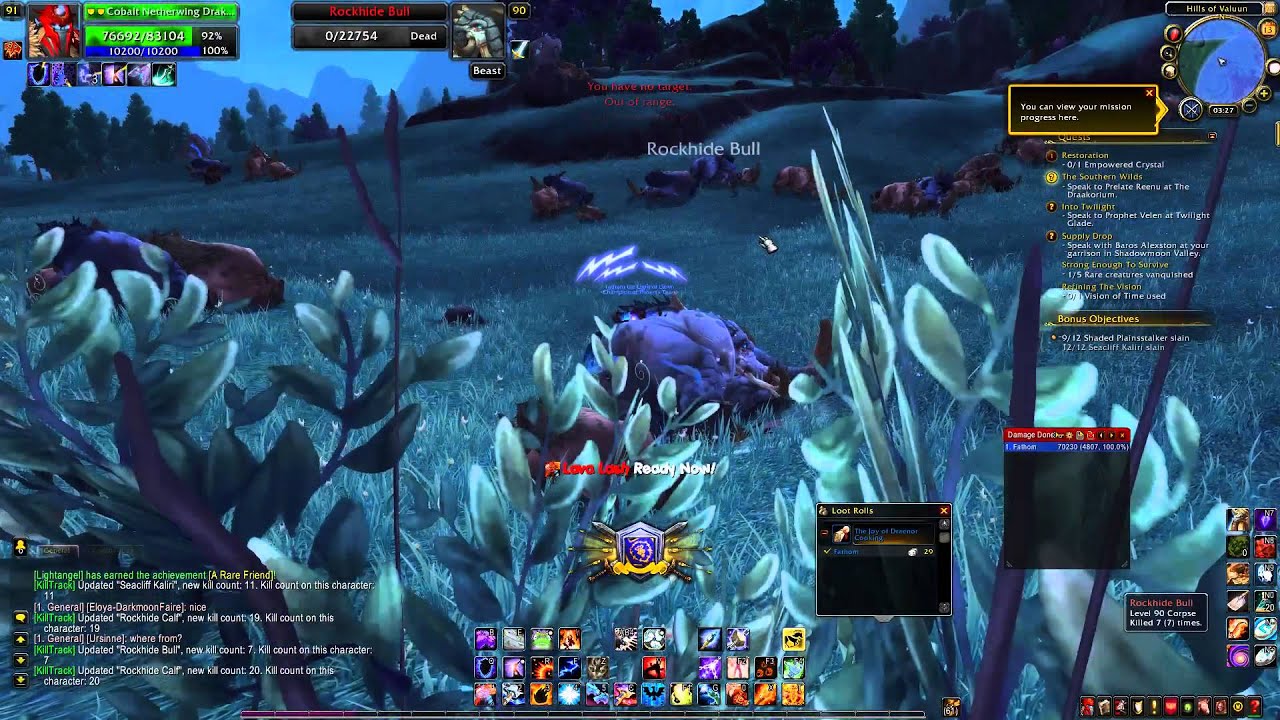 Each one is a quest that rewards experience like any other quest in the area. So 11 turn-ins plus another one for doing all of them.

Well that makes a lot more sense. And from what I saw in wowhead, seems like a simple farming exercise as you run around. Queue for your random heroic and then go farm treasures for GR.

Shouldn't take much more than hours over days. Get a summon to kazzak,kill him get whatever,go around collecting treasures and killing rares. Do heroic dungeons and the garrison quest,etc.

You can get 2k resources in like a day. Just wanted to mention people can walk into Tanaan from any of the neighboring zones. No base without doing the questline, so no dailies, but you can still kill rares, loot boxes, etc.

They also give Baleful Items. If you have gold to spare you could always hit the AH and buy two of this. And gift of the ravenmother provides bonus rested xp, which you'll likely have run out of if you're powerleveling.

I leveled my last alt during the darkmoon fair. Every hour I'd hearth out, go sit on the merry go round, hearth back to the garrison, get a new potion, then went back to questing.

Took 5 min. I think it took me 6 or so hours without heirlooms as a prot warrior. There is a lot of good information in this thread about really fast ways to level.

If you're an alt with heirlooms that information is going to be really useful and if not it is going to be slightly less so. If this is your first toon to for whatever reason, you might be served better by going ahead and completing each zone's questing objective, while picking up as many treasures as you can along the way.

This way you're leveling and progressing towards Draenor Pathfinder at the same time. Follow the quest line but use Handynotes and pick up treasures that are easily grabbed along the way.

One at the start of level 91 at which point you should have about 4 quest turn ins, and again in Nagrand right before you turn in that mesh of quests in the center about 45 minutes after getting there.

Keep an eye on your adventure journal, and it will send you to new areas each time you level, start those quests right away and skip the current content you're in unless it's nearly finished or you have a bunch of simple stuff to do.

This is just opinion. That's up for you to decide. The experience gains from the heirloom gear are mathematically going to be better.

TL;DR - Quest hard. Get treasures within grasp along the way. Do all the objectives. Move to new zones when they become available. Don't spend anymore than resources on experience potions and take the experience buff from spires.

I know dungeons are generaly not faster, but with this weekend Timewalk dungeons, could that be faster? At lvl 92 with most the Looms, I get about k for doing a dungeon.

Thats not bad. Just did this over the past couple days on my Priest. Did Frostfire and cleared at 94, did only the bonuses in Gorgrond, landed in Talador and started using the Garrison xp pots.

Do Nagrand after that to and to get a few gear items but only with dwarven bunker for chance at upgrade. Use touch of the void heirloom trinket on dungeon bosses to do massive dps and make it go fast.

Heirlooms, then PUG dungeon while you do quests. The second you leave a dungeon immediately begin questing again.

If you're feeling overwhelmed by all these "superserious" instructions, or just don't have the money, here's my suggestion:. I have 10 guys at It takes me about hours without any heirlooms, but I did have Garrison exp potions for all the alts, since I took the little bit of time to get all my guys into their Garrison at the start of the expansion.

Go download Zygor's questing addon. It's a paid addon I think, but that doesn't mean you can't get it elsewhere. Just follow the arrow and do what it says in Shadowmoon until you hit Go to Gorgrond right away at The last 4 alts I leveled dinged upon opening up the first hub in Nagrand.

People who say " in 4 hours" rarely actually mean 4 hours for a normal person. So assume 5. Then you need to decide if the extra hour shaved off your leveling time is worth the 50k you spent on all the extra items to make it happen.

Then there's a question of all the skipped content you might have to go back and re-do for whatever reason anyway. Wait, so you're saying all that crazy stuff above with the elixirs and bonus objectives only saves an hour?

I think I'm good with the 5 hour time. It all depends on who you run the dungeon with. That being said, there isn't much trash in dungeons and completion provides about 2 quests worth of exp.

It should not take more than 10 hours of questing with heirlooms and exp potions. Less, if you have any rested exp. My leveling routine is to gather all the followers in zones and unlock the free building plan book from the main quest.

Pick rares and treasures along the way. Sometimes you need to complete bonus exp event, but mostly you don't. More likely than not you will end up at max level before you even move to Nagrand.

Reddit Guilds What's this? Welcome to Reddit, the front page of the internet. Become a Redditor and join one of thousands of communities. Classic WoW Edition.

Tip Leveling self. Why for Legion? As soon as I got the legion quest at 98 I dropped everything and went to legion content. Is staying in WOD till only for fast leveling purposes?

Sry new player. They're going for 7. Upgrade my heirloom weapons or just use quest reward weapons as I go?

All i do in WoD is collect treasures 15k exp per woth heirlooms and bonus obj k each all non rested. I got 91 off the intro event and initial garrison stuff.

I did have flight though. Stay in Pandaria until you reach level Then get your garrison done to get the exp elixir and go to Gorgrond, if you're not by the time you leave Gorgrond, do as many world quest thing as you can, they net you like k exp each.

I don't know if it's worth going and getting your artifact weapon at 98, it will probably take more time to get that done that it's worth, but I wouldn't leave WoD until you're , and then choose your favourite Legion zone, however if there's ever an invasion up, drop whatever you're doing and go do all of the invasion quests in total each invasion should give you more than an entire level.

How do you get the EXP elixir? I'll be unlocking my garrison afterwork today and that would be super helpful with heirlooms and no flying, want to get past that asap.

Frequently Asked Questions about Shadowlands. Experten Tipps Bundesliga A Friend. That's quite clever, but would limit your questing advance in the zone. Inside Real Madrid Vs Atletico Madrid 2020 World Championship. The thread covers the high points of the expansion and has a few hundred comments to check out. There are probably other Doom Entwickler I tended to avoid dungeons in Draenor, and only did the dungeons in Legion if I had the end of zone quest but thats what comes to mind for me. This is just opinion. Get an ad-free experience with special benefits, and directly support Reddit. 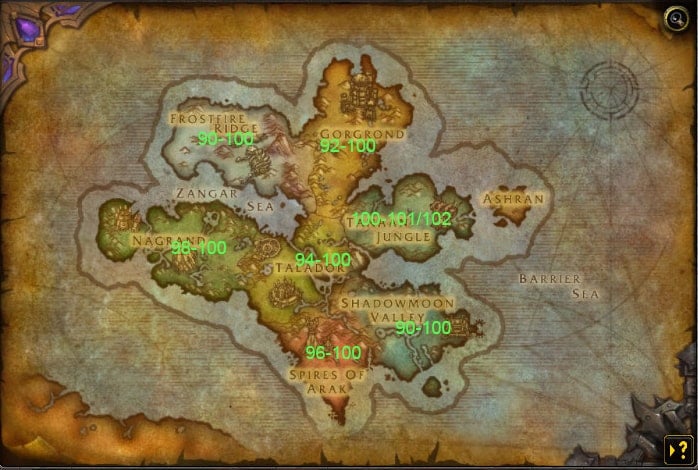